Accessing folders via WebDAV on Windows

Accessing folders via WebDAV on Windows

WebDAV means Web-based Distributed Authoring and Versioning. It is a set of extensions to the HTTP protocol which allows users to collaboratively edit and manage files on remote web servers (meaning by remote access to the content of the web-server). It was defined in rfc4918 and evolved to a de-facto standard.

Files (or folders) stored in the cloud can be accessed via WebDAV but the access is not available if you are syncing folders between clients only. Many operating systems come with built-in WebDAV support and allow to upload, access and explore files stored in the FAUbox without the client or any additional software installed. On faubox.rrze.fau.de all WebDAV traffic will be SSL-encrypted.

In order to get access to your FAUbox folders via WebDAV, you need a WebDAV URL. The WebDAV-URL could be either:

If you want to access all of the FAUbox-folders, you have to use the first URL, while the second one is useful in case you only want to get access to a single top-level folder. In order to get access to the content of a single top-level folder, you have to add the foldername to the first URL. Example: If the top-level-folder is called Apple, the URL would be: https://faubox.rrze.uni-erlangen.de/webdav/Apple

The address can be used in any WebDAV client to access the contents of a folder stored in the FAUbox.

You can only access folder created and owned by yourself or folders which you are a member of.

The instruction for guests is located further below in the section called “III. Instructions for external users/guests”

To access folders via WebDAV, you will need an authentication token, aside from the WebDAV URL, which will authenticate you as the rightful user and your username which is usually your SSO-username (EduPersonPrincipalName) in the form of <IdM-username>@uni-domain.de.

The <domain> could be:

1. To get to the authentication token: 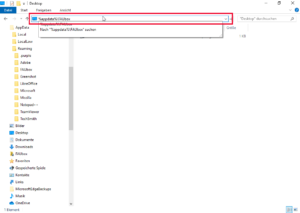 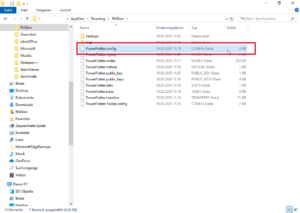 5. Search for the line: server.connect.token.webdav=…
The part following the ‘=’ is the token needed for the WebDAV authentication.

Please note! Each authentication token has an expiration date and has to be renewed afterwards.

To renew the token:

2. To set up a WebDAV connection:

1. Open the Windows Explorer.
2. Right-click Computer in the left navigation pane.
3. Click on Map network drive…
4. Select a free drive letter under the Drive drop-down.
5. Enter the WebDAV URL of the folder into the Folder field.
6. Check the Connect using different credentials checkbox.
7. Click on Finish. 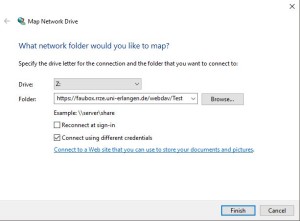 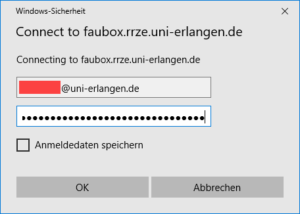 3. To disconnect the WebDAV connection:

If you want to disconnect the network drive:

External users/guests have to follow the same instruction as internal users but instead of using an authentication token, they have to set up the connection using their FAUbox username and password.

1. Open the Windows Explorer.
2. Right-click Computer in the left navigation pane.
3. Click on Map network drive…
4. Select a free drive letter under the Drive drop-down.
5. Enter the WebDAV URL of the folder into the Folder field.
6. Check the Connect using different credentials checkbox.
7. Click on Finish.
8. Connect using the your FAUbox username (the e-mail-address you were invited to the FAUbox with) and password to authenticate yourself. 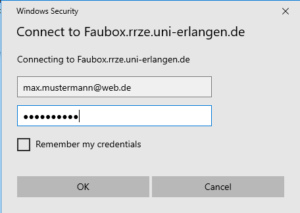 IV. Setting up a WebDAV connection via command line:

1. Open a Command Prompt window (or start cmd.exe).
2. Use the following net use command to mount your folder to a drive letter of your choice.

2.2 To access not only to one folder but the whole content of your FAUbox, leave an empty line between webdav/ and /user: instead of a folder name. Example:
net use * https://faubox.rrze.uni-erlangen.de/webdav/ /user:username password /persistent:yes

Always replace the words username and password with the your access data when typing in the command. 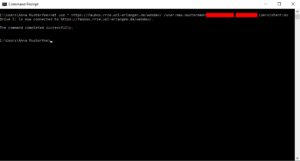